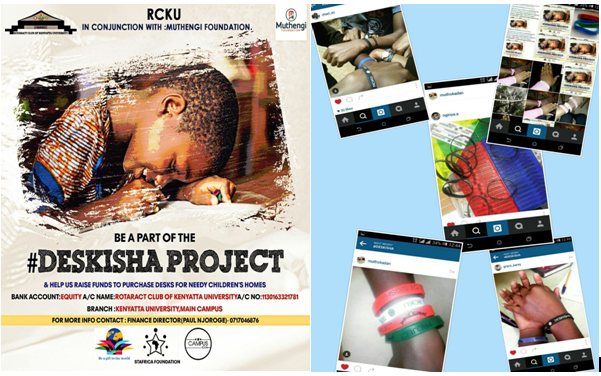 Deskisha is bilingual with an English stem and a Swahili finish to it. The best translation would be ‘get desked.’ It is what we at the Rotaract Club of Kenyatta University (RCKU) have dubbed our signature project for the Rotary year 2015/2016. In the previous Rotary year, we successfully undertook the Rotertank project. For that project we raised money using proformas and sale of T-shirts to purchase a water tank for Christ Our Refuge Children’s Home (CORCH). CORCH is the children’s home that RCKU has been working with over the years. It is situated in Kahawa Sukari area not far from Kenyatta University main Campus. Deskisha aims to buy desks to facilitate learning of the children at CORCH. Lack of desks is one of the crucial facilities the home lacks as it seeks to empower the rehabilitated urchins.

The project is scheduled to come into completion on March 19TH, 2016 .On the particular day we will hand in the desks at CORCH in a planned fun-filled event. Karibuni!

Deskisha also marks the 10TH year anniversary of the club at Kenyatta University.

In striving to make the project even a bigger success than the previous one RCKU partnered with the Muthengi Foundation. Muthengi Foundation is run by David Muthengi aka Holy Dave and her sister, Joey Muthengi. Courtesy of the foundation the project was put on the spotlight by Capital FM, the high urban radio station in Kenya. To publicize the project we came up with the Deskisha hashtag (#deskisha) which we put up on social media forums while posting pictures of the project. At first we aimed to trend on Mondays but we progressed to make it a daily thing. First to go up on social media was the poster of the project which is displayed below. After that were the bands before the sales began as well as after. Then members were to show off the bands worn on their arms in pictures that they posted. Some of the posts have been sampled below:

This way we have been able to sell over 200 wrist bands. To do this we have sold them at allevents that we have attended. These events include Mentor 101 that brings together eight Rotaract clubs for mentorship as well as the camp organized by the same at Embu. We have also visited the clubs during their fellowships and sold the wrist bands there. RCKU has visited the Rotaract Club of Nairobi Parklands, Nairobi Central as well as our mother club, the Rotary Club of Nairobi South. In addition to that we have brought in alumni of RCKU who will contribute towards the same. The alumni will join us at CORCH on March 19TH, 2016. This will be our last community service event this semester. It will also couple to mark RCKU’s 10TH anniversary.
Deskisha is a testament of continued RCKU mantra to empower and involve our members. With an ambitious 9-week project from planning, execution and delivering results on the same.

Once more, we appreciate all those people who have supported us all through.
See you on 19th March 2016, as the Mighty RCKU will have a 4 Service based event.