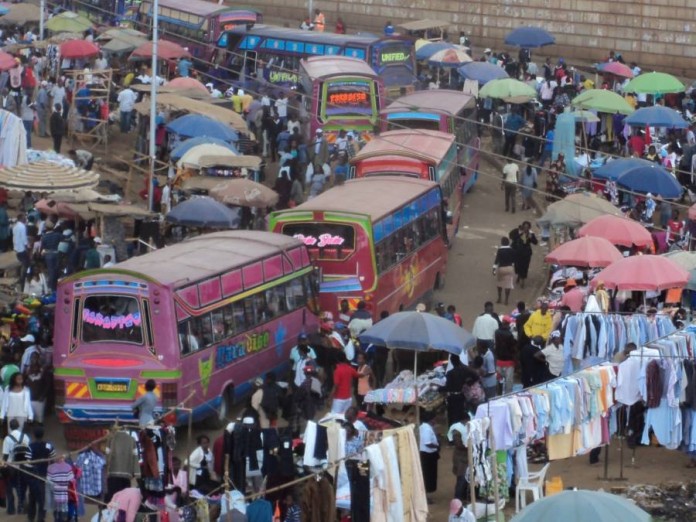 The weather was not notable, the day perhaps even ordinary. The matatu took the exit that led to Githurai and almost like clockwork, everyone on board switched their screens off and the phones went into pockets and purses. It was almost as if some imaginary attendant made an overhead announcement. For the first time heads looked up. I noticed the girl, right about my age, seated next to me. I also noticed mine wasn’t the only head looking up and out. With nothing to stare at on my palm, I let my mind wander as I looked around.

That is when I saw him. He couldn’t have been much younger than me. Decent and as clean as I suppose his circumstances could allow him. He had a wheelbarrow for a vending station. Apples and grapes were the choice items. The kind with droplets of water on the surface. He then did it, almost like a routine, took a bottle with a holed cap and sprinkled somewhat fuliginous water onto the surface of the fruits.

He abruptly left his station and went to help a man heavy laden, whom I hadn’t seen, lift his luggage out of the pavement and onto the road, crossing it. I then wondered had he been summoned or was he just a well-taught, kind young boy, or was there some code of conduct between vendors that allowed him to leave his station unattended and not worry whether his good shall be stolen. Nonetheless he was back to his station.

Two boys, closer to his age than mine passed him by. They had bottles of glue ready at a sniff, and carried gunias from their shoulders. They were bemired and disheveled. He looked at them. I couldn’t tell by the expression on his face whether it was pity or relief or perhaps he paid them no attention. I wondered if he saw them as his brothers or his adversaries or his neighbours. As he picked up the bottle sprinkle some more water on the fruits, was that resignation or was he thanking the heavens it wasn’t him and at least he has fruits to sprinkle water on, a job.

He dislodged the rock holding his station in place and steered it away. I guess in search of paying clients or away from my stare. In the space right behind him a woman not much older than I began laying out large paperbags on which I supposed she would set out the clothes tied in the bales next to her for sale.

I didn’t take much notice of the woman because the boys image was lodged in my head. There was something about him. Not that there was anything striking about his features, his face was smooth unadulterated by adolescence perhaps, I never did see his teeth because he never smiled, I suppose he didn’t have reason to. His head was well shaven. The matatu began to move and that is when I saw it.

A large billboard advertising a man, rather his campaign for the election of MP of the area. I paid no mention to the name nor the details of the billboard, but how could I when there was this blood red background.

This, however, I couldn’t but notice, the contrast. This man, had a hard-set face almost weathered down by life’s hardships, wrinkled down by enduring too much or frowning more than he smiled. I don’t know. Then there was his neck, layered, and his abdomen, at least what I could make of it, was bulging, perhaps from indulgence. I also don’t know. But his hard-set wrinkled face wasn’t far off from the unadulterated young boy’s face I had seen. Almost like that was a trajectory of how the boys face would look in a few years, after all of life’s rage had been poured out and he still remained standing.

I wondered if the old man pictured in a bloody red background had only found a way to sprinkle the fruits at his station, just with more water than that of a bottle. That after years of shifting his wheelbarrow from one place to another, he hoped to find the clients that would pay.

The matatu was onto the next stage and screens were being unlocked and one by one heads looked down. I couldn’t help but remember the unadulterated face and the hard set wrinkled face, I didn’t know what to make of the resignation that I saw. It almost said ‘Such is life’

Of Money and Happiness