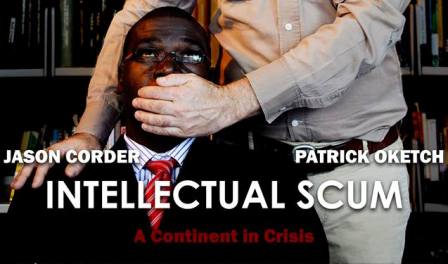 Written and directed by Kevin Njue, the short film is produced by Rocque Pictures. Intellectual Scum is an adaptation of the controversial article, ‘’You lazy African Intellectual scum,’’ by Field Ruwe, a US-based Zambian media practitioner.

The film is set aboard a commercial airplane, an African intellectual named Ruwe is seated next to a white man, Walter. In their conversation, which is utterly brutal, honest and to some bit racist, Walter blames the ‘intellectuals’ as the reason behind the deplorable condition of the African continent.

Njue’s masterpiece was announced last week at the 21st edition of the Afrika FilmFestival- Leuven, where 18 films from 17 different African nations competed for the Young African Film Makers Award. The competition is aimed at supporting new talent from the continent towards the creation of high quality films and, a positive vision of Africa in the media.

YAFMA is named after Guido Huysmans (`1958-2014), one of the two founders of the Afrika FilmFestival (AFF), which gives Africans the opportunity to tell their own stories.