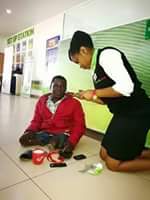 Yesterday a photograph of a safaricom employee identified only as Pauline broke the internet. In the photograph, Pauline was kneeling down serving a crippled customer. Someone captured the moment and it literally went viral in mere hours. Let’s get this clear,I am in no way rubbishing Pauline’s act of kindness towards this customer. Let’s look at it this way, there is no way this customer could have stood ,even if he wanted to,he is crippled for crying out loud. The rational thing for her to do was kneel down and attend to him. However,I have a problem with the way Kenyans are handling this issue. In fact,I am disappointed.

People with Disabilities are part of humanity and thus offering services to them should not be considered as a favour. It breaks my heart to see people who claim they love giving back to the society behaving like people with disabilities are a marginalized community. Why? Just because the services offered to ‘normal’ people may require the service provider to go an extra mile when delivering it to people with disabilities? I remember one shocking scenario when Bishop Kosgei; Celebrated gospel act Emmy Kosgei’s father had to crawl down from a Fly 540 plane simply because none of the staff could help him. We keep preaching against tribal division,ooh religious division,what about division based on how we were created. Let me remind us all that we did nothing special to God for him to give you that perfect figure you go flaunting all over. Actually, that figure deemed perfect by society, I beg your pardon.

And in the same breath,they did not wrong God in any way for them to be created with disabilities. God had his own master plan in creating us all the way we are. Let us stop behaving as if we had a say in it at all. Anyway, my point in all this is, by applauding Pauline’s act as heroic, we may actually be doing more harm than good. Allow me to quote a certain Facebook user, “unconciously it is like labelling it as an act of service to ‘others’ Have we even considered the psychological effect this could have on our disabled brothers and sisters?”

When Gambling Goes Wrong, Then What? Sportpesa Manenos.