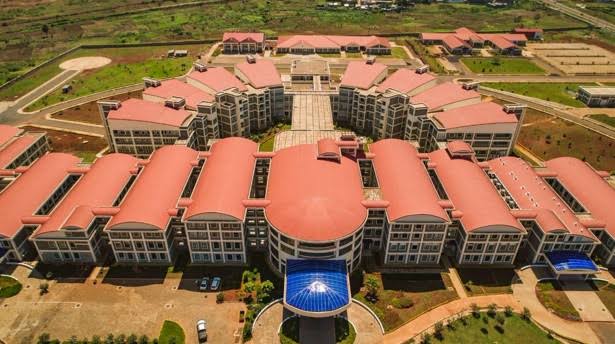 The Hospital was meant to be used by students and staff for academic purposes while at the same time generating income for the university. That is not happening anymore as KU lecturers are complaining of being barred from accessing the facility. They are forced to rely on other hospitals to carry on academic activities.

In 2011, the then KU Vice Chancellor Prof. Olive Mugenda, who is the current CEO of the hospital pioneered a project of constructing the facility. The main aim was to establish a teaching, research and referral hospital that would be used to coach students in the college of Health Sciences, practicals and attachments. The project came in mind at a time when the university was spending a hefty amount of money in facilitating for students practicals and attachments in external hospitals such as Kiambu and Embu Level 5 hospitals.

The university sourced a loan from china and commenced the construction that would run for approximately five years. By 2016, the 650-bed state-of-the-art facility was complete, costing a total of Ksh 9 Billion. By then the facility was considered as the best medical facility in the country as it remains now. Apart from offering regular Medicare, the state-of-the-art facility has an oncology-cancer unit, Trauma & orthopedics and Renal services among others. The hospital also utilizes a modern Medicare method known as Tele-Medicine where patients consult directly medical professionals from other parts of the world. This means that patients don’t have to travel abroad for treatment.

The plan was to have the hospital begin its operations as soon as it was complete in order to help pay the huge loan from the proceeds. However, operations at the facility did not begin immediately because of lack of funds to hire staff. Despite having formulated a sound plan for the hospital establishment, the university had failed to plan how to bring it into a working status.

The delay in commencement of operations at the hospital extended to 2018 when the loan repayment was set to begin. The Chinese loan firm started demanding the loan repayment which the institution could not adhere to. This caused a feud between the university and the government in a bid to seek funds to repay the loan and commence operations at the hospital.

In 2019, the national assembly through its health committee stepped in and negotiated funds from the treasury to aid the facility. Kenyatta University lost the hospital after it was transferred to the ministry of health in 2019 when president Kenyatta gazzeted it as a government parastatal, taking it away from the institution. A memorandum of understanding (MOU) was signed between the university and the hospital management to allow students and lecturers to continue using the facility for academic activities. However, that is not happening any more as students and lecturers are treated like complete strangers and have no stake at the facility.

The hospital has now been converted into a full government-run facility especially with the advent of Corona virus. The hospital was considered as a turning point when Covid-19 striked the country at a time when it was insufficiently prepared. With its 650-bed capacity, the hospital was able to accommodate a lot of patients in critical conditions especially the Elite ones who would have flied abroad in search of similar facilities. More so, the hospital has the best equipments in the country especially for cancer treatment and kidney dialysis. It has continued to increase its capacity with an aim of reducing the number of patients travelling abroad for such treatments.

With the current state of affairs at the hospital and considering the usefulness it has shown, there are very minimal chances of Kenyatta University ever getting back its ownership rights. The only hope is to revisit the MOU that was signed to give the university partial ownership of the hospital. Even if that happens, it will never be enough considering that the facility was specifically meant for the institution and not the government. It is a very unfortunate situation for KU and a great shame to the government for taking away that which was meant to inspire young generations towards scholarly excellence in the field of medicine.

Right now, students are experiencing constraints in accessing other hospitals’ facilities while their own fully equipped hospital is being run by cartels with personal interests. Other major universities in the country such as Moi University have their own hospitals to which students and lecturers have unlimited access to the facilities.

The university would then be granted back its ownership rights; to run the facility as it was dictated in the university’s mega plan. In so doing, students would be more exposed to their career requirements in medicine and in a few years’ time Kenya would have the facility as the best university hospital in east and central Africa, just as it is with Kenyatta University Post Modern Library.

The eyes are now fixed to the parliament to introduce a bill to the house in a bid to see KU get back partial or better still full ownership to the facility. Although it seems like trying to get blood from a stone, it is the only way out. This will ease the challenge that students and lectures are currently undergoing, loitering up and down seeking medical facilities to carry out academic activities while their own facility lies in their midst but they can’t access it.

How to Download Your Academic Transcript From KU Students Portal