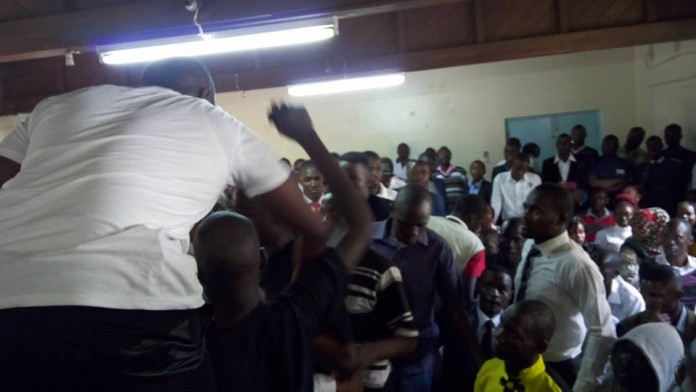 KUSO elections ended in disarray today where University leaders across this nation congregated at YMCA, a venue next to UON.

The elections did not happen because one SAM WERE WERE (current KUSA president), an aspirant for KUSO chairmanship  and ANYUNGU WANYUNGU (current JKUSA president)  who was Contesting the sec Gen who were  the only big threat because of their linchpinly wisdomised words were ousted harshly from the hall. This led to angry comrades from KU, JKUAT, MASENO, EGERTON, BARATON, JOUST ,MMU and KISII universities abort the elections. Mr. Were Were was reportedly injured and his clothes tattered.  The MMUST president Winnie Nyandiga was also harassed at the entrance.  It is also alledged that ‘wise men’ were charging an extra fee.

The angry comrades proceeded to JEVANJEE GARDENS and made a statement that a time has come for the lost glory of KUSO be reaffirmed.

In one accord the elections were postponed in one weeks time .

In a different statement, Mr. Ocholla K’Ocholla of #TeamWere was kind enough to answer a couple of questions and here’s what he had to say regarding the fracas today.
Q: What happened today at KUSO elections from your point of view and why (in your opinion).
Ohola K’Ocholla: “To the best of my knowledge and in the view of all liberal comrades from across all universities in the country , there never occurred any students election. I am only aware of a student gathering held at YMCA, UoN to collect comrades ‘ views on how elections should and Must be conducted.”

Q: What’s does team Were wish to happen now that we cannot condone what has happened today.
Ocholla K’Ocholla :”This matter is not all about team Were Were, but about the interest of all university students across the country. Nonetheless, It so happened that comrades want Were Were as the KUSO chairman. I want to remind our UoN counterparts that SONU and KUSO are two different organizations. We are therefore making the following demands which MUST be adhered to before any election can be held:
1. The list of delegates MUST be reviewed by a committee with representatives from each university to clearly determine who votes and who doesn’t.
2. The same list of delegates must represent the true face of Kenyan universities taking into consideration their population.
3.The patronage of the organisation should be reconstituted to avoid political interference.

If this cannot be done by the current leadership, we will show them how it will be done. The spirit of comradeship is much stronger than those of individual imposters. Lastly, if KUSO cannot serve comrades interests because it is being equated to SONU, then All other universities will lead a serious Union to protect comrades’ interests.”

Official communication will be made as to when the much awaited KUSO elections will take place. Meanwhile let us all strive to maintain peace amongst comrades.

Disclaimer: The views expressed in this article are not a reflection of the writer’s views but a narration as given by witnesses of the botched ‘elections’.