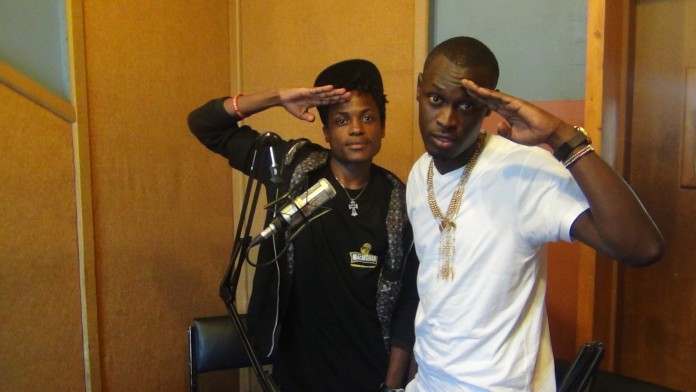 #KUFMDRIVEOne on One
KING KAKA, KAKA EMPIRE,487 AND STILL COUNTING!
He is arguably one of Africa’s best acts. This star quickly rising from Kenya and beyond, threatening to blind the globe is definitely a force to reckon. The one and only King Kaka talks to @ThatGuyChaxy about ambition, passion, music, fatherhood, rebranding and the Kaka Empire. Have a look at how it went down on KU FM DRIVE.
The Kansoul’s Double Tap fades into the airwaves of Ku Radio and a hyped up @ThatGuyChaxy sings along as he welcomes the one and only King Kaka into the building.

Chaxy: do you feel like you are getting worthy returns?
King Kaka: let your passion drive you. The money will come in later.
Chaxy: since you are pro play KE,do you listen to non Kenyan music?
King Kaka: of course I do, you have to know what the others are doing. On that note, my track with Chris Brown and wycliff  is coming soon!
Chaxy: a big shout out to you for being so vocal about promoting Kenyan music at the end of the day it’s our responsibility to grow our industry. So I think its time for the countdown..how do we do it?
King kaka: I would like to talk about a couple of things before that. There is the Kaka Empire Tournament. It’s going to happen on the last Thursday and Friday of this month. We are going to mentor kids  who are under 15 and the on the next day there will be the foot ball tournament.it will be happening whenever schools are closed
Chaxy: who qualifies for the Kaka Empire and the Youth fund?
King Kaka: we have already selected the teams for the first edition.  We have teams from Ololoo in Kaloleni where I was born and bred, there is one from Mathare, another one from ShauriMoyo  andOkongo. They are going to play and the winner gets some prize money ,medals and uniforms. The best thing is that the two best players get a scholarship. We are trying to get the culture running and I know we will get more sponsors with time. Right now, it’s just Kaka Empire and the youth Fund.
Chaxy: Is that the same tournament you were with Gkon and RapDamu?
King Kaka: No that is another team called Unfit Football club. We are pretty good Harambee stars even noticed us.
Chaxy: What other Charity projects are you involved in?
King Kaka: There are so many things we are doing, from Ugali movement, to drinks campaign where by every month we visit children’s homes. If you want to join just follow me on IG and get details whenever I talk about them. Other artists also have projects running like Avril,FemiOne, Owago, etc. we are trying to build an industry where our artists can be respected brands and they can make an impact on society. That is the main key of Kaka Empire, to create growth.  You know when I say let’s promote Kenyan music I don’t mean that you should just play my music, just play all Kenyan artists.
Chaxy: So culture week is coming up and King Kaka is coming through.
King Kaka: nko ndani kama thong!
Chaxy: So what should we expect from King Kaka?
King Kaka: There is the Countdown, Mr. Tanzania, and there is a project in December called The Kings Arena. It will be Epic. The first of a kind in Kenya.  Mark that name.
Chaxy: Thanks for coming through for this.
King Kaka: Big up to the K.U fam. I’m so grateful  I have fans here. The first time I came here I was Chiwawa’s back up artist. The love is amazing. There is something I’m introducing,tune in to my instagram, Facebook and twitter page.
Chaxy: There is also the talk to Kaka from 3:00 pm.
King Kaka: It’s from 3-5 pm. The number will be provided a few minutes to 3. I’m building an army and I want you to join me!
King Kaka Social media contacts:
Instagram: The King Kaka
Facebook: Rabbit King Kaka
And the countdown continues.
For more of this and other great interviews tune in to KU FM Drive every day from 4-&p.m Hosted by @ThatGuyChaxy.