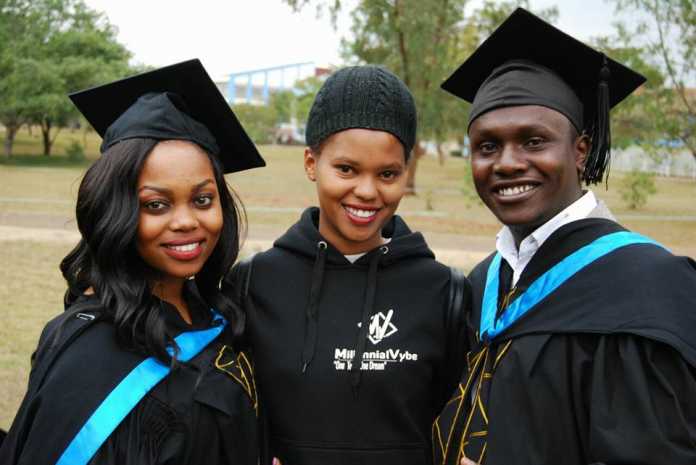 Here are KU Students who you definitely know that graduated in August 2017; from student leaders to app developers to utanunua leo – self proclaimed big bom/chocolate entrepreneurs.

Even with the odd semester dates due due to the lecturers strike(s), these popular students from Kenyatta University main campus have successfully completed their 8.4.4/8.4.5 curriculum.

Well known as quite the enthusiast in KUSA politics for the last 2 years to most, Brian Kibet was among those awarded a bachelor’s degree. He held a seat at KUSA as the organization’s Finance Secretary 2015/2016.

Perhaps the most popular on this list, Washington Shamela was introduced to me a while back as the KUSA Organizing secretary (the hair says it all I presume). Stands for himself and others when such is called for – born leader I’d say!

Former Gender Secretary Kenyatta University Students’ Association (KUSA) 2014/2015. Smart, beautiful and funny, Glorious represented the school and organization during her tenure. Her sense of fashion is on fleek too!

Freethinker. Nerd. Android Enthusiast. Internet Evangelist. Samsung device user. – That’s how he describes himself 😀 Duke Bob was an engineering student – built the Kenyatta University App! He’s one guy you should follow on Facebook, has a joke up his sleeve for most if not all current affairs.

Quite the regular at the KUSA circles, Amos studied English Literature at Kenyatta University. Here’s an interview we had a while back Unity – This is What Has Brought Me This Far. An Exclusive with Amos Onyango

KUSA Secretary General Ken Mutua. I couldn’t find any picture of his graduation day. Just this one below with the blue suit.

Who did I not mention on the list of KU students who you definitely know that graduated in August 2017?! Leave their name in the comments below and we’ll feature them too!