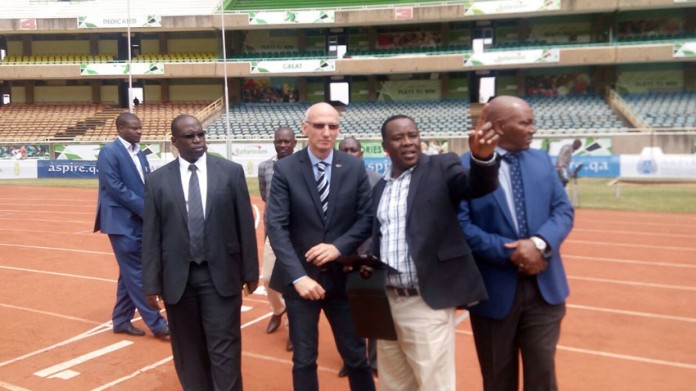 IAAF head of Event Operations, Carlo Deangu, expressed satisfaction with progress made by the Local Organizing Committee (LOC) so far ahead of the 2017 IAAF Under-18 World Track and Field Championships.

“In 2007, I witnessed Kenya host World Cross-Country Championship in Mombasa and they brought enthusiasm for athletics. I believe that even at the U18 championships it will be the same hence we gave Kenya a chance to bring more colour to the event,” he said.

It was also announced that Kenyatta University (KU), located 20km from Nairobi’s Central Business District and 12km from the Safaricom Stadium venue is the designated Athletes’ Village.

Deangu was scheduled to tour other facilities that will host other support staff and IAAF guests for the biennial age event that is slotted for July 12 to 16 next year on Monday afternoon.
“The reason why we choose KU is because it is not advisable to put youngsters in different hotels in town since managing them will be a bit hard. It was appropriate the venue due to the structure and space available. It will be easy to secure them, facilitate their transport and is near the venue.”

“When Deangu came, we were in the process of writing to the IAAF to give them the events timetable and we are more than delighted to host him,” LOC chairman, Mwangi Muthee added.

He revealed discussions were going on between integrated communications giants, Safaricom who hold the naming rights of Kasarani Stadium and Chinese firm Sinopec, the marketing rights holders of IAAF over branding at the venue.

“We are negotiating with our lawyers on how to go about the issue since we have to carry the IAAF branding. But we shall soon have a meeting with Safaricom soon,” the former Kenya Rugby Union boss explained.

Safaricom have branded the entire interior of the stadium they christened ‘Home of Heroes’ with their corporate colours and murals depicting various famous Kenyan sports personalities that is in conflict with regulations governing marketing and commercial rights entered belonging international governing bodies.

The delegated is expected back for another site visit mid next month after the LOC publishes its first progressive report on July 15 detailing the tendering of equipment and other facilities among other key structural arrangements.