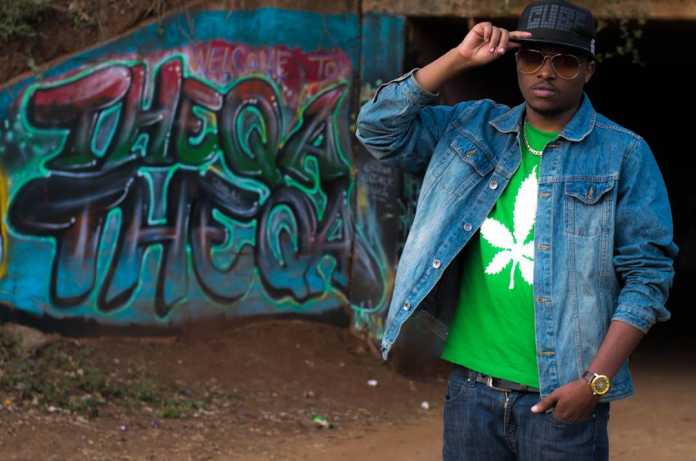 Kenneth Kyangu Isaac aka D’Jungle is a Thika based Hip Hop artist who started rapping while in primary school, he used to entertain his peers during break time by singing along to music from legendary acts such as Kalamashaka, Wenyenji, Abbas Kubaff.

After joining University he recorded his debut mixtape dubbed THC; which saw the hit song Theqa Theqa shoot him to fame earning him a spot on Homeboyz Radio Fresh Man 2016.

The Economics and Finance finalist at Kenyatta University believes that the sky is never the limit and one day he will put Thika’s music on the global map.

He advises parents to encourage their kids to pursue their heart desires, they should support their kids because money cannot buy you happiness, a child may work towards being the best doctor in the world at the expense of striking a balance in making a career out of art.

1. Were you born and brought up in Thika?
I was brought up in Thika in fact at some point we were once residing at Mundia Estate opposite the Kenya National Library Service-Thika Branch, moved to Pastoral Centre, Section Nine and finally Ndunyu Sabuk in the outskirts of Thika.

I started my primary school education at General Kago Primary School, one of the most famous schools, I have fond memories of growing up in this town we used to frequent Kwa Mishu (the area between Jehovah Witness Kingdom Hall and Thika High School) that nowadays plays host to Mount Kenya University Hostels, most of my peers also had acquired a habit of rearing Sukumo (rabbits) we used to compete the one with the biggest would either slaughter and throw a party for the hood boys or sell it at a good price.

2. What do you love about Thika Town?
Thika has always been cosmopolitan town, growing up here I could interact with people from diverse backgrounds, not many people especially outsiders know about this, imagine it’s the only town that you will find an estate called Kisii in Central Kenya without necessarily having any residents from that particular ethnicity residing there.

3. Do the people of Thika offer you any support in your work?
Yes, the reception after releasing Theqa Theqa hit track was phenomenal, though it didn’t receive a lot of airplay on radio stations in Kenya, our fan base has grown whenever i’m on tour or performing at a concert I get requests to redo that particular track.

For the longest time artists especially in performing arts such as music have gotten little or no support in Thika, but the turn up during my concerts is so commendable.

4. What would you like to change about Thika town?
Thika doesn’t feel the same again as the town continues to grow and expand am about worried by the rising levels of vices such as crime it goes to show that many young people in this town are resulting to negative vices to perhaps keep up with the demand for better life, seeking shortcuts to gaining wealth.

I’d love to see renewed efforts towards empowering the youth let the authorities that are invest in improving infrastructure such as social halls, football grounds, recording studios and make sure that we have regular activities that will keep the youth busy.

5. Thika is worth visiting because?
Thika is endowed with loads of natural resources that are easy to access and free for that matter, come and visit the famous Thika and Chania Falls at Blue Post Hotel, have a bite of fresh pineapples grown at Del Monte (K) Limited and while at it sample our music we have the most talented artists in this town that are second to none.

6.What challenges do you face as upcoming artist ?
Finding a producer to work with is one of the toughest tasks I have faced as an upcoming musician, am grateful for having a very young and talented production team, in fact I owe it Super Producer and also my recording label CMG they have always guided me towards achieving quality work, not so many artists out there even the well-established ones can confidently say this.

7. What should your fans expect from you?
I am working on my debut solo album dubbed “Unchained” it should be out sometime in December , I have featured the likes of Deniro Ule Wa, Wakadinali, Virusi Mbaya, Zaka of Ukoo Flani and many other artists. This one I promise will blow every one’s mind off and put Thika on the global map.

Popular Ugandan Artist Back to the industry By Storm!