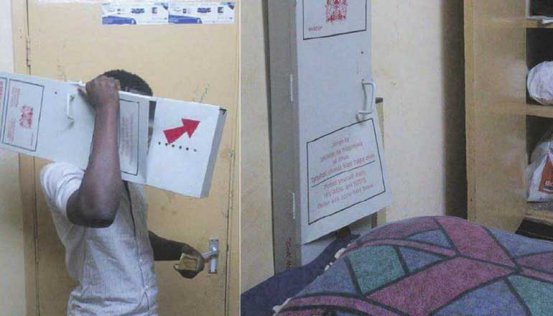 When a photo of a college student allegedly carrying a condom dispenser went viral on social media days after lecturers strike began, it uncovered the immorality that currently sweeping across most campuses.

It is now two months after lecturers in public universities all over the country downed tools demanding for implementation of a Collective Bargaining Agreement (CBA) by the government.

Since most of the campuses have not announced their official closure following the strike, comrades who are still at college have embarked on weird habits, on top list being lungula, to cater for the leisure time.

Esther Kariuki, a third year student at Kisii University, says she has observed the rise of notorious mafisi comrades demanding for sex from every Dick and Harry, although claims she has not fallen prey of them.

What’s annoying her is the irresponsible disposal of CDs after ‘job.’

“After cracking on beds all night, those mafisi keep throwing condoms along hostel corridors and in public places without respect,” she notes.

The season seems to have intensified cohabiting among comrades, as ‘sponsors’ have taken the opportunity to spend time with campus beauties.

With the characteristic financial dryness especially from extinction of HELB money, the ‘sponsors’ have scaled up their games and they are up to turning many clients by hook and crook.

Lilian, a Maseno student, says her roommate has not come back since her ‘sponsor’ took her for a date during the Valentine season in February.

“She tells me her man does not want to release her because the tutors strike is still on,” she says.

Now that there are no lectures, there is less worry for books for comrades who rave on weekends. But this time, raves have become an every night activity. Comrades say “it’s party time!”

24 hrs is extremely a long day doing nothing. Comrades have braced themselves with the latest movie series in market, and they cannot get tired watching so long as they are blue movies.

What is campus life without hikes? Comrades now have time to visit beaches in Mombasa or Kisumu, or maybe trail to Nairobi national park. Of course there will be selfies for Facebook and Instagram followers to make the adventures perfect.

7 Nairobi Estates notorious for PR0STITUTI0N (#1 will shock you)