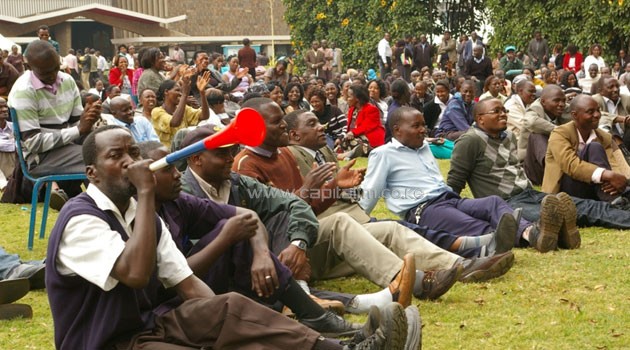 The Government has offered striking lecturers Sh10 billion hoping they will call off their three-week boycott.

However, Uasu secretary general Constantine Wasonga said they will not accept the money until they know how much each lecturer will get.

He also declined to call off the strike ‘until we are sure about what we are getting and also until the 2013-2017 Collective Bargaining Agreement is negotiated and implemented’.

“It is not just about giving us figures. We are not interested in the lump sum, what matters to us is what the offer translates into to an individual lecturer,” said Wasonga.

He added: “As far as we are concerned, the strike is still on and the negotiations have also not ended. Sh10 billion may look like a lot of money until you calculate what an individual will earn. Some people may actully end up with nothing. Our technical team is working on the figures.”

“If the money will not be what we want, then we will reject the offer. If anything, we are not in a hurry. If the about 300 MPs want to take home a whole Sh3 billion, how then do you give 15,000 lecturers Sh10 billion? It’s a joke,” Wasonga said as the talks at a Nairobi hotel were adjourned to allow for more consultations.

UASU demands will see lecturers paid six times what they are earning now. This will see the highest paid lecturer take home Sh1.2 million monthly and the lowest Sh248,430.

The demands are contained in the contentious 2013-2017 CBA the lecturers’ union wants implemented before they can return to work.

Currently, a professor, the highest paid, earns Sh211,000. Wasonga said they want their salaries to match those of their counterparts in the rest of the civil service.

“Our proposals are not about percentage increment but harmonization to address the disparities. We want salaries to be restructured for lecturers in public universities so that they are equivalent to what their counterparts in the civil service and private sector earn,” he said.

“We have professors who are more qualified than the education Cabinet Secretary yet he earns less than the minister, why?”

In the proposed salary structure seen by The Standard, the union is proposing that a professor be paid a minimum basic salary of Sh999,030 with the maximum being Sh1,562,625.