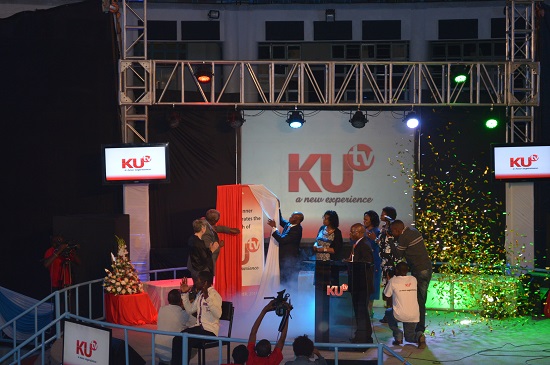 Yesterday evening history in the making as Kenyatta University launches it’s own TV station, which will be available in all free to air set-top boxes.

“70 per cent of the programs will be local content,” she said during the launch of the station Saturday evening at the Amphitheater.

The station, based at the university, will air programs on health, innovation, business, careers, culinary arts, comedy as well as legal matters.

DW representative in Kenya Njoki Muhoho said the collaboration will help improve the quality of content aired by KUTV.

“We want to assist them as much, we want K.U to be the go to station for broadcast learning. We have provided satellite dishes and technical expertise for the TV station,” said Ms Muhoho.

Ms Mugenda said the unveiling of the station was a “dream come true”.

“We thought about it five or six years ago but didn’t think it would be this great. We dared to venture to this area to educate, inform and entertain. We will not be a TV station that only criticises but also offer solutions,” she said.

The station was officially launched a few minutes to 9pm by K.U Chancellor Dr Benson Wairegi.

“KUTV will offer original, up-to-the-minute coverage of national and global stories. This station reinforces African efforts to tell the African stories and also to bring the global stories to Africa,” Dr Wairegi said.

He said the station will also earn the university extra income.