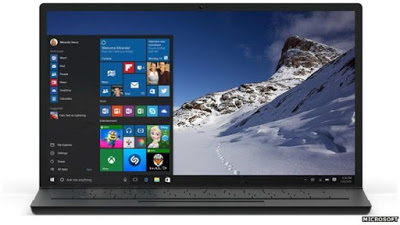 Home Entertainment Technology Windows 10 to be released by Microsoft in July | K.U-Comrades Forum
Facebook
WhatsApp
Twitter
Telegram
Pinterest
- Advertisement -
Microsoft’s next generation of its operating system, Windows 10, is due to be released next month.
The company said PCs and tablets running the software would go on sale on 29 July, at which point the OS would also be offered as a free download to existing users.
The roll-out of the product for smartphones, Xbox games consoles and other kit will follow later.
One expert said the release could prove critical to the Microsoft’s fortunes.
Windows 8 – the current iteration – has had a troubled life, with many deciding not to update to its touch-centric user interface.
The company has acknowledged the fact by returning some features dropped from the more popular Windows 7.
“We designed Windows 10 to create a new generation of Windows for the 1.5 billion people using Windows today in 190 countries around the world,” wrote Terry Myerson, Microsoft’s vice-president of operating systems, on its blog.
“Familiar, yet better than ever, Windows 10 brings back the Start menu you know and love.”
He also highlighted new additions, including:
Many company watchers had not expected the launch of the product to happen until later in the year.
One analyst said the release was important as it might be “Microsoft’s last chance” to crack the tablet market before Android and iOS became too entrenched, but added that it was unlikely to drive demand for new equipment in the same way earlier Windows updates had done.
“Microsoft and Intel are certainly pushing the two-in-one device strategy [in which laptops transform into tablets], which could result in some sales,” said Michael Silver from the tech consultancy Gartner.
“But it’s not only the fact that the upgrade is free, but Windows 10 for PCs is designed to run on computers that ran Windows 7 and even do better on less powerful hardware, so it will not spur on sales to the same extent as we’ve seen in the past.”