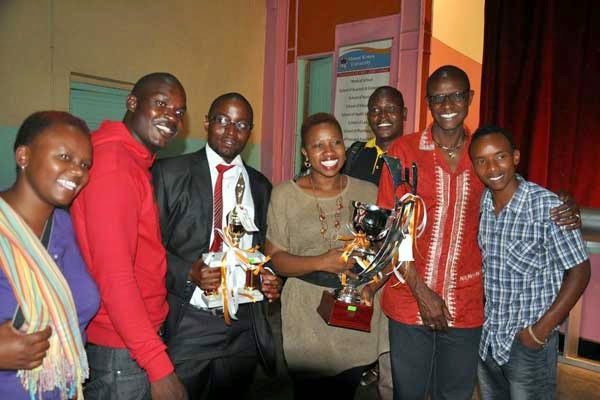 The English play was well received by the audience during the first day of the gala concert featuring 52 winners from ECD, primary, secondary schools, teacher training colleges, technical institutes and universities.
The functions were held at Lohana Hall and Melvin Jones in Nakuru.

Most performances by universities came late and did not adhere to the programme, which was scheduled to start at 8am.
Many items presented were based on current topical themes such as corruption, drug and substance abuse, child labour, domestic violence, poverty and land grabbing, among others.
“This is indeed commendable because they are interpreting what we as a nation are encouraging at this point in time,” said adjudicators Chrispine Basara, Rose Mitheu and John Oyuch.
A new trend also emerged, with private universities taking the lion’s share of the trophies presented.
Zetech University came second with their play ‘Chronicles to Vatican’ while Kenya Methodist University (KEMU) was third with the play ‘Pots of Smoke’.
WINNERS TO ENTERTAIN PRESIDENT

The winners in every category will entertain President Kenyatta and his invited guests this Friday at State House in Nakuru during the State Concert to be televised live from the venue.
In the oral narratives, Masinde Muliro University of Science and Technology (MMUST) carried the day with ‘Kumbekumbe”.
Laikipia University were second with ‘Nakadhalika’ and the Technical University of Mombasa were third with ‘Jadas’.
Mount Kenya University’s (MKU) Kakamega campus were the winners in the cultural dance category.
Their well-choreographed dance was about two women fighting for control of the family calabash to serve their king-husband.
The dance brought out the symbolic importance of the calabash where the two queens fought for the king’s attentions in the well-dramatised dance choreographed by Mark Wabuli and Ruth Mutahi and produced by Prof Stanley Waudo.
STAND-UP COMEDY WINNERS
Egerton University were the winners in the stand-up comedy category, Technical University of Kenya were second while Zetech University were third.
In the modern dance category, MKU were the winners. They were followed by MMUST while Zetech were third.
Kisii University students were the winners in the mime category. They were followed Moi University and African Nazarene University were third.
In choral verses, Technical University of Kenya were top with ‘Reflections’.
They were followed by Zetech University with ‘Ufurufuru’ while Kisii University were third with ‘Kukuiro’.
During the day one Gala concert at Lohana, Karima Girls High School presented a moving cultural dance titled ‘Wendo wa Bũrũri’ (Love for the Country) scripted and choreographed by Peter Ndung’u and produced by Mrs Catherine Irungu.
“Our creative dance ‘Wendo wa Bũrũri’ is symbolic of how we need to be patriotic and love our country despite the numerous attempts by those with ill motives to try and bring about disunity,” said the principal Mrs Catherine Irungu.
Source: Daily Nation